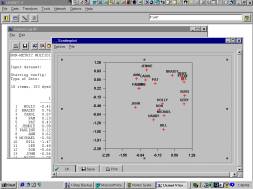 » Added new routine Network|Whole-network|Homophily/Influence|Continuous to measure overall network autocorrelation for continuous attributes. Essentially, it measures the correlation between having a tie, and having similar attribute values

» Added reciprocity routine to the CLI. Both arc and dyad reciprocity are computed, and for arc reciprocity, a comparison with density is also provided, as (in random graphs) the expected value of reciprocity is density. Syntax is reciprocity(

» Added access to the DL Editor from the CLI. Syntax:  DLEDIT [

» Improved transitivity calculation in both the menu and the CLI. It is now much faster. Also, for very large networks (5000 nodes and 5 million edges), it was giving the wrong answers due to overflow. Now it is correct.

» Added option in Tools|Testing Hypotheses|Dyadic|Logistic Regression to choose 1-tailed vs 2-tailed significance. Previously, only 1-tailed was available. Now, 2-tailed is the default

» Data for Learning Ucinet.xlsx. This excel file, which is automatically installed with UCINET, has been updated

» Data|Remove|Isolates. Fixed bug which caused it to treat missing values as ties. Fixed another bug which was causing it to print the original matrix, not the one with isolates removed.

» SVD. The SVD procedure in the CLI was updated to match the 2-mode centrality routine discussed above

» Eigenvectors. The eigenvectors() function of the CLI was updated to give better answers in the case of repeated eigenvalues.

» Hubs and authorities. The Network|Centrality|Hubs and Authorities routine was updated to give better answers when the principal singular value is repeated. In addition, the singular values are now printed.

» Fixed Network|Dyadic measures|Reachability routine. It was failing to run with larger datasets. In addition, it now runs in 64-bit mode as well as 32-bit.

Windows operating system Vista or later. If you have a Mac or Linux, you can run UCINET via BootCamp, VMFusion Ware, Parallels or Wine.

The 32-bit version is the standard one and runs on both 32bit and 64bit Windows systems. A limited 64-bit version is available but does not have all UCINET functions

The more RAM the better, but the 32-bit version can't take advantage of more than 3GB of memory. If you have large data and a 64-bit version of Windows, you can try experimental 64-bit version, in which case 8GB of RAM or more would be useful. Remember, however, that even if a really large dataset fits in memory, it may take too long to analyze.

While the absolute maximum network size is about 2 million nodes, in practice most UCINET procedures are too slow to run networks larger than about 5000 nodes. However, this varies depending on the specific analysis and the sparseness of the network. For example, degree centrality can be run on networks of tens of thousands of nodes, and most graph theoretic routines run faster when you have very few ties, no matter how many nodes you have.

It assumes that the software has been installed with the data in the folder C:\Program Files\Analytic Technologies\Ucinet 6\DataFiles and this has been left as the default directory.
When UCINET is started the following window appears. The submenu buttons give access to all of the routines in UCINET and these are grouped into File, Data, Transform, Tools, Network, Visualize, Options and Help. Note that the buttons located below these are simply fast ways of calling routines in the submenus. The default directory given at the bottom is where UCINET picks up any data and stores any files (unless otherwise specified) this directory can be changed by clicking on the button to the right.

To run a UCINET routine we usually need to specify a UCINET dataset and give some parameters. Where possible UCINET selects some default parameters which the user can change if required. Note that UCINET comes with a number of standard datasets and these will be located in the default directory. When a routine has been run there is some textual output which appears on the screen and usually a UCINET datafile contain the results that again will be stored in the default directory.
We shall run the degree centrality routine to calculate the centralities of all the actors in a standard UCINET dataset called TARO. First we highlight Network>Centrality>Degree and then click This will bring up a box as follows If you click on the help button then a help screen will open which looks like this. The help file gives a detailed description of the routine, explains the parameters and describes the output that will appear in the log file and on the screen.