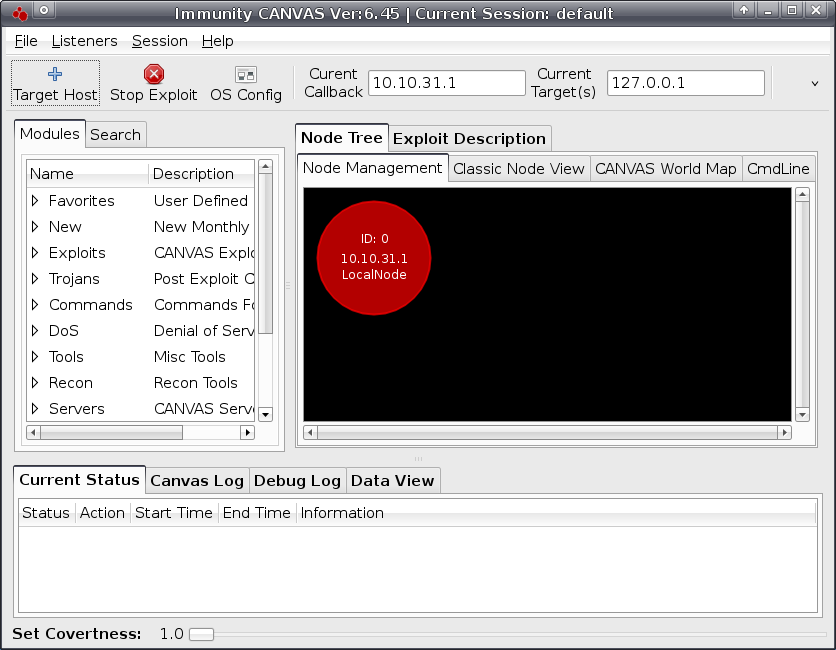 Exploits
- currently over 490 exploits, an average of 4 exploits added every monthly release
- Immunity carefully selects vulnerabilities for inclusion as CANVAS exploits. Top priorities are high-value vulnerabilities such as remote, pre-authentication, and new vulnerabilities in mainstream software.
- Exploits span all common platforms and applications

Operating System
CANVAS is written and designed to be run on Linux. While Windows and OSX are supported platforms, Linux is where CANVAS really shines. If you are tied to Windows as part of corporate IT policy, CANVAS also runs well in a VM (see the requirements above). For Linux, any modern desktop distribution with solid package management will work. We recommend:

Agora
While providing security specialists with 0days, GLEG acknowledges that there is a certain interest to exploits for vulnerabilities discovered by third party researchers. To meet this interest GLEG has made available the "Agora Pack".

The Agora Pack contains more than 80 exploit modules from the product known as "Argeniss 0day Exploits Pack", along with exploits for fresh publicly available vulnerabilities and 0days exploits discovered by GLEG. Modules are designed to be used with Immunity CANVAS. Agora content does not intersect with VulnDisco Pack Professional.

Agora SCADA+ Pack
The SCADA+ pack speaks to this new trend by providing its customers with exploits for both public vulnerabilities and 0day vulnerabilities in SCADA systems. If you serve an industry that does any type of automation, the SCADA+ pack should be on your radar for running the most realistic attack scenarios and penetration tests for your customers.

DefPack
In an attempt to provide pen testers with a most comprehensive collection of Defense software vulnerabilities illustrated GLEG created the DefPack Exploits Package. Anti-viruses, IDS and IPS systems, Firewalls, Account Management systems, End-point protection software and more are targeted. Defense Software is very special due to its wide usage and critical nature. The pack contains mostly exploits for public vulnerabilities along with some 0days discovered by GLEG.

MedPack
The MedPack is an attempt to collect most medical software vulnerabilities in a one exploit Pack. GLEG covers the software that is widely used in Medical Care and Dental accounting. This Pack could be of interest for security specialists working in this particular field.

ProtoVer Pack
The ProtoVer Test Suite combines the results of InteVyDis's complied work over the years.

VulnDisco Step Ahead
With the Step Ahead Pack, all modules are provided under the terms of Developer license, which allows you to create patches, workarounds, signatures and use them for commercial needs.